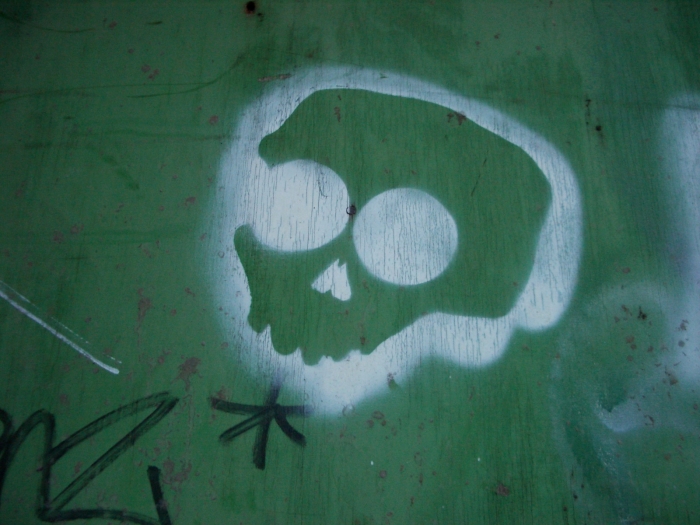 Who actually owns necro-waste? This is a point that I kept returning to while reading Philip Olson’s “Knowing ‘Necro-Waste.’” Olson does a good job working through how both organic and inorganic materials contained by the human corpse assume and/or are categorized as “waste products.” But who or whom then ultimately owns these waste products?

As Olson explains “…the human corpse can be conceptualized as a threat to public health, as a sacred object, as an object of considerable political or metaphysical power, as an aesthetic medium, as a source of nutrients, as a commodity, and as form of material waste—call it “necro-waste.”[1]

And that this necro-waste then creates new kinds of realities: “In short, it occasions new ways of knowing human corpses, as well as new ways of knowing ourselves, through the various norms and practices that govern the disposal of necro-waste…To some it will seem improper to think of dead human bodies as waste.”[2] Which begs the question in my head: do questions of ownership alter the appropriateness in any way? Does ownership of necro-waste make the dead biomaterials any less “dead?” It’s one thing to say a dead body is necro-waste. It’s another thing to say that next-of-kin, local authorities, or the state can make a legal decision granting ownership of postmortem materials to one party over another.

The ownership questions reminded me of a necro-waste related Ohio State Supreme Court Case, Albrecht v. Treon (2008), which asked whether or not next-of-kin owned human remains removed by medical examiners during autopsies.[3]

In 2001, 30-year-old Christopher Albrecht drowned to death after suffering a seizure while driving his car and flipping the vehicle into a pond. Ohio law required that a postmortem exam be carried out as a result of the accident and an autopsy was performed in the Hamilton County Medical Examiner’s office. After the autopsy was completed, Albrecht’s body was then returned to his parents, Mark and Diane, for a funeral and burial. What Albrecht’s parents did not know was that when the body was returned to them, the Medical Examiner’s office had kept Christopher’s brain for further testing. The ME’s standard procedure required removing the entire brain and keeping it in a preservative solution for a period of time after the body’s release to the family.

After the testing was completed, the brain was then disposed of as medical waste. Mark and Diane Albrecht only discovered that their son’s brain had not been buried with his body after reading the full autopsy report, several years after the funeral took place. They filed a lawsuit, and after initial litigation, the Albrecht’s case ended up at the State Supreme Court. The case file, Albrecht v. Treon, 118 Ohio St.3d 348, 2008-Ohio-2617, explicated the Albrecht’s ownership claim this way:

[The Albrechts] do not assert that they did not receive the body of their son for burial, nor do they contend that petitioners mishandled or in any way abused the body. They allege, instead, that once the autopsy was completed, they should have been given the opportunity to retrieve the brain for burial. [The Albrechts] argue that petitioners’ failure to give them that opportunity violated their due-process rights.[4]

By making the due-process claim, the Albrecht’s attempted to extend (I think quite understandably) their personal ownership of their dead son’s brain; an argument courts have found problematic. The Ohio State Supreme Court was no different. In June 2008, the Court ruled against the Albrecht family, and found that:

The next of kin of a decedent upon whom an autopsy has been performed do not have a protected right under Ohio law in the decedent’s tissues, organs, blood, or other body parts that have been removed and retained by the coroner for forensic examination and testing.[5]

The rationale used by the Justices was that under Ohio law, any “…retained tissues, organs, blood, other bodily fluids, gases, or any other specimens from an autopsy are medical waste” [emphasis added in the original].[6] Medical waste must then be disposed of in Ohio through a legally recognized manner, e.g., incinerated by a bio-waste disposal company.

Once the Medical Examiner removed Christopher Albrecht’s brain from his body for postmortem examination, that brain ceased being ‘owned’ by any Albrecht family member. By excising the brain, the necro-waste conditions that Olson describes stripped the Albrechts of a legal claim to the “waste.” The emotional and familial claim certainly remained, but for state authorities the larger public health issues superseded next-of-kin ownership. Property rights and human organs/tissues are a tricky subject, and clearly buying and selling organs is against US federal law, but does defining an autopsied human brain as medical waste truly remove next-of-kin rights?

There are many other legal cases similar to this one, both new and old (e.g. the John Moore case, the Henrietta Lacks case) and they keep coming back to this question: who/whom/which laws/what institution defines, and then owns a dead body’s ‘waste’?[7] The ownership of postmortem biomaterials by next-of-kin has become increasingly complicated, since the ownership appears connected to a demonstrable interest. Yet just because next-of-kin proclaim a desire to completely possess a dead body and its constitutive parts doesn’t mean that the state will recognize this claim as valid. As Olson correctly notes, Sophocles’ play Antigone raised precisely these issues a long time ago.

Catherine Waldby and Robert Mitchell rigorously explore waste and waste ownership in their significantly more recent book “Tissue Economies.”[8] The book asks key questions, such as, if a ‘waste material’ is taken from your body but actually extremely valuable (e.g. the Henrietta Lacks case) do you as the original “owner” of the biomaterial have any claim to it? Do your next-of-kin? Or, if a person dies and then becomes a cadaveric organ donor, do the next-of-kin have any necessary claim to the donated organs? The answer to both questions, as with the Albrecht case, is No.

Olson adds new insight to these conundrums by bringing the words “necro” and “waste” together. Both terms connote something that is abject or disposable, but in different ways. A whole, intact dead body isn’t regarded as a singular mass of waste, but the pieces that make up that dead body (limbs, appendages, skin, etc.) can become disconnected either through natural decomposition or external intervention. Once disconnected, the pieces become more explicitly necro-waste as their “identity” is stripped away from the original owner.

What Olson alludes to and could have even expanded upon is that necro-waste doesn’t necessarily have to be waste at all. A lot of necro-waste can, and often does, become a valuable commodity when its postmortem value is radically redefined, even if it’s not bought and sold. As was widely reported in early February 2016, Johns Hopkins Hospital began organ transplants between HIV-positive patients.[9] The transplanting of a heart from an HIV positive donor to a recipient who is also HIV-positive illustrates how a previously abject piece of necro-waste can suddenly assume life-saving possibilities. The gift of life, as the organ donation ethos goes, can now include biological materials that otherwise would have been explicitly discarded as waste and can be given a new necro-waste function beyond being labeled “contaminated.”

The discourse around waste and waste products and how the state defines “what is waste” and what is “not waste,” is loaded with political concerns. Olson’s article lifts the lid, I think, on discussing how necro-waste can be productive in almost unlimited ways. What the Albrecht v. Treon case demonstrated is that the concepts of “waste” and “necro-waste” could, and probably should, be split into multiple categories. In responding to Olson’s article, I created a partial and hardly exhaustive list of what those necro-waste categories could be and the kinds of waste products that each category might contain.

Returning to my opening question, “who owns necro-waste?” is unsatisfactorily difficult to answer. After reading Olson’s article it seems clear that simply knowing about or recognizing necro-waste never guarantees ownership. Conversely, owning necro-waste can occur whether or not a person actually recognizes said ownership. Olson is right that necro-waste takes on many forms and that it will continue to expand for the foreseeable future in both substance and appearance.

Where I think problems will persist is when next-of-kin want to possess a dead body’s necro-waste and state authorities say that’s not possible. Or, maybe some kind of agreement could be reached whereby next-of-kin understand that the state can delay returning the necro-waste but that these supposedly abject materials will indeed be handed over to family members as postmortem property. The irony, of course, is that this problem clearly predates Olson’s observations but that his newly configured name for human postmortem materials might have just given the entire necro-waste ownership question renewed urgency.

Like Loading...
‹ Philosophy, the Academy, and the Public: A Reply to Frodeman and Briggle, Luke Maring
Is Anyone Still Reading? A Second Response to Maring, Adam Briggle and Bob Frodeman ›

This site uses Akismet to reduce spam. Learn how your comment data is processed.